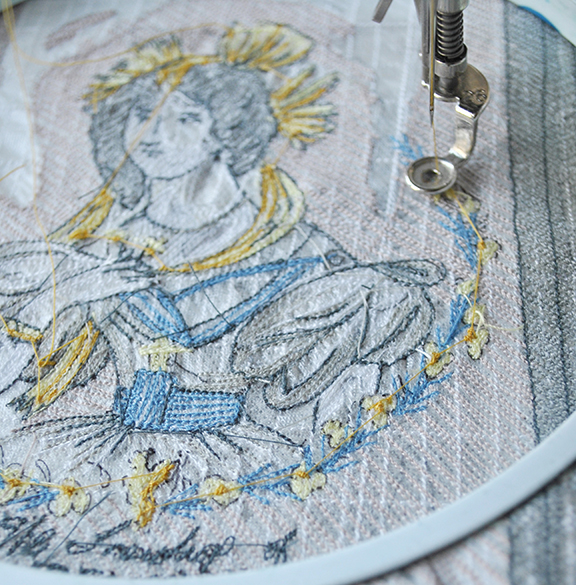 For the past few months, I’ve been gathering images from a local historic site in Toronto called “Montgomery’s Inn”.  I have been working on translating these images into embroideries on a 1 to 1 scale. I’ve titled this project, Embroidered Objects.

Within the project Embroidered Objects, I have rendered historic objects transparent through my embroidery process, recreating them on a 1 to 1 scale and I have placing them throughout the Inn. Through this act, I hope to create create a connection between these spaces,the material of thread and memory.

Thread’s fragility makes it an ideal material to reference the temporary nature of spaces and objects that we surround ourselves with. I am interested in the way that objects can communicate stories and histories. Montgomery’s Inn has been interpreted and objects have been chosen to suit the time period presented. Not entirely document and not entirely fiction, this historical site illustrates through objects and rooms, the story of the inn and the family that ran it while also highlighting its particular social and economical function at the time. I have chosen to recreate objects in pairs to illustrate the idea that there are different options for presentation.

I have chosen to recreate two plates, an etching of Queen Victoria, two chairs and two framed prints for this project.

The two blue and white dinner plates are embroideries of two plates present in Montgomery’s Inn within the dining room. One plate shows a farm scene and the other a river scene.  These two environments reflect Montgomery’s Inn’s location- close to the river and a place where there was farmland surrounding.

The arrangement of chairs and frames creates a symmetric vignette with two possible chairs and two etchings on the wall. Like a mirror, they reflect each other but unlike a mirror they have differences as well.